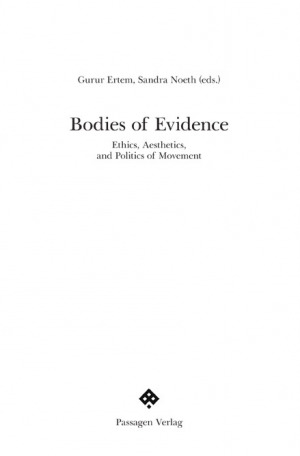 Ethics, Aesthetics, and Politics of Movement

This book focuses on the human body in, of, and as evidence. It illuminates how the body appears simultaneously as witness, document, and agent as it moves across borders drawn by vectors of power such as nationhood, sovereignty, and normalcy.

From multiple perspectives traversing the fields of visual and performing arts, social anthropology, political theory, critical journalism, and philosophy, this book interrogates the complex ways in which the body is implicated in contemporary “crises” and addresses its political and ethical repercussions. Contributions to the volume include commissioned articles, essays, interviews, dialogues and case studies that offer insights into corporeality as the often-neglected dimension that cuts through ethics, aesthetics, and politics.
The book is commissioned by tanzhaus nrw Düsseldorf.