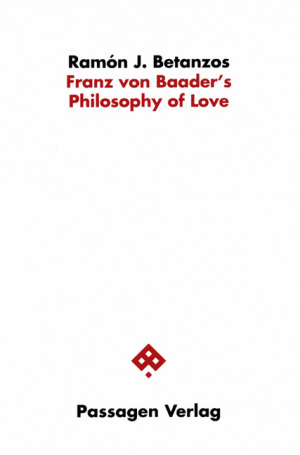 Franz Xaver von Baader (1765-1841) is an enigmatic figure. Although his written output is largely undisciplined and his prolix rhetoric difficult to assimilate, he was widely admired by the early German Romantics and profoundly influenced their thinking. His reputation and influence, however, waned rapidly after his death. Today, he is only marginally known in the German-speaking world and virtually unknown outside of it.
In this monograph, the late professor Ramón J. Betanzos organizes and articulates Baader”s philosophy of love by systematically tracing it through a vast and complex maze of essays, articles, commentaries, lectures, reviews, manifestos, aphorisms, propositions, and fragments. In so doing, he also demonstrates how Baader reintroduced discarded and neglected philosophical traditions – particularly mysticism and theosophy – and made them intellectually respectable in a world where scepticism and rationalism prevailed.

Ramón J. Betanzos – born in 1933, died in 1995 – was a Professor of Humanities at Wayne State University in Detroit, Michigan.